I think I need to rename this blog… maybe it should be called “teaching on the verge… outside” because it seems that this year, especially, so much of what I’m noticing is happening outside.  I think that this has a lot to do with the greenbelt strip we have at the edge of our playground which offers so many more possibilities for learning than a traditional playground ever could.

We recently had a day of heavy rain which melted all of our snow.  This was followed by a drop in temperatures and a good dump of snow.  The snow stuck to the ice which had formed on all of the branches, creating a beautiful effect that puts every branch into stark relief against the blue sky.  The denuded trees looked sparkly and crisp and the evergreens were heavy with layers of snow and ice.  FI asked if the trees had grown; everything looked fuller and more substantial.  According to the calendar it’s still fall… maybe we need a new calendar!

LH was very interested in the way her feet crunched through the snow and the frozen slush underneath, leaving very defined footprints.  She took me to see a large footprint that she thought belonged to a monster.

Then she created a footprint of her own which she told me came from a big dog. 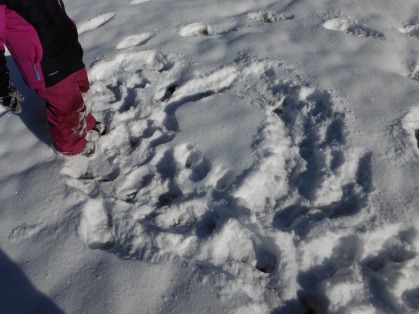 LH has an amazing imagination so this discussion of footprints quickly swerved in a different direction as a group of students came to tell us about the chipmunk they had just seen.  In response, LH said: “At my grandma’s I saw 18 chipmunks, 18 dancing chipmunks, and they did cartwheels and skated on the ice.”  She then decided that she should camouflage herself, like animals do.

As LH was hiding in the branches, I noticed two boys playing on the ice in a nearby ditch. I was concerned because the ice had weakened during the rain so I went over to show them that it wasn’t safe to stand on.  I cracked a hole in the ice with my boots and the children moved back on to the bank.  They were undeterred, however, and changed their game.  Now, they were ice fishers!  They found sticks and vines on the ground and began using them as fishing rods.  One of the boys, BH, often engages in fishing-play.  He rallied the others to fish through the hole in the ice.  He told them: “You have to be quiet so the fish don’t get scared.”  LH joined them and told us: “I ate fish last night and it was real: I put ketchup on it.” Clearly, only the realest fish needs ketchup!

I think this a great post. Our entire K-3 school is staffed by women; not a single man works there (except occasionally when the I.T. or trades come in). Nobody thinks that’s strange but in the case of the reverse, I think people would be uncomfortable. It’s a good opportunity to take another look at our assumptions and question them.

I wanted you to see

What children do with ice

When it is everywhere.

And there isn’t enough snow

They cracked the ice

There was only bare grass underneath.

Have you ever heard of such a thing? 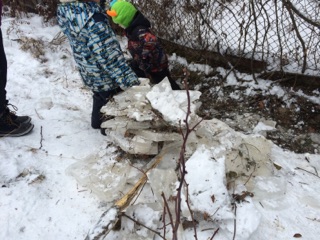 We tend to think of art as a product: a thing to hang on a wall.

We, that is, those of us who aren’t artists, miss out on all of the messiness about and tossing aside that happens long before you have anything to hang up.

As a choreographer, I know how many ideas I try on for size before I hit on one that I like and that works with my dancers.

Young children approach the creative process differently.  Their art is, quite literally, ALL ABOUT PROCESS.  We often talk a good talk in education about process-based assessment and about looking beyond the product for insight into learning but at the end of the day we remain quite concerned about what’s on the paper; the product.

Many kindergarten students couldn’t give a hoot about what their painting looks like when they put down their brushes.  They are interested in how the painting changes as they add layers of paint, how the paint behaves, how it mixes together.  They will often start with an image and then paint over it.  Their process often has more in common with storytelling than it does with paint-by-numbers.  SH, for instance, began by painting a robot and then added several layers of paint over top.  You can just glimpse the robot underneath.

This art work challenges us to closely observe children’s process as they work through their creative ideas and not to settle for assessment that is only interested in the product.

In August, I showed you some photos of our newly renovated classroom when it was completely empty.

Over the course of the last few months, our supplies have slowly trickled in and we’re finally feeling as though the room is beginning to take shape.  We’d love to hear your thoughts on our 4th teacher (we already have 3!)… the environment! 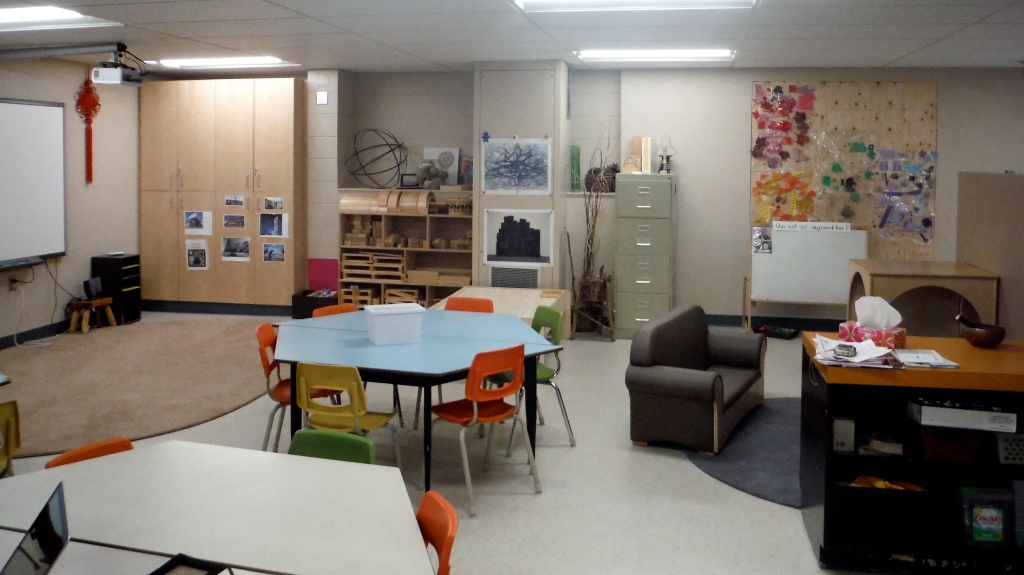 And in case you’re wondering… we still don’t have a window!

We have had ice before today; thin sheets on shallow puddles.  Today was the first day that we had real ice.  The kind you have to stomp on to get it to break, the kind that beckons you out to the middle of foot-deep puddle/ponds to see how many jumps it will take to break through.  This was serious ice.

There is something about ice that just begs children (and adults, I confess) to break it – such a satisfying crunch and the interplay between the solid layer on top that conceals the liquid beneath.  It leaves you wanting more and more.  Being the committed inquiry-based, child-led teacher that I am, all of this ice leaves me in a pickle.  I can’t let them walk out into the middle of the puddle/pond because I know that eventually they will break through and find themselves knee-deep in cold, icy water.  But, at the same time, I don’t want to entirely deprive them of the ice-breaking pleasure that they so crave.

So we become the ice police.  We chase them away from the deeper spots and we let them go to town on the shallow puddles and ditches.  Sometimes, when I’m watching them, I stomp down with my own heel… just to hear the crunch.

I must be easily amazed, credulous, or naive because things happen in the classroom all the time that leave me gobsmacked.  Children are an endless source of surprise and amazement and, while there are themes and strands of inquiry that come up over and over again, the children’s focus, insight, and intelligence continue to astonish me.

We are still visiting the green space every day during our outdoor inquiry time.  As soon as my feet hit the gravel, children run up and ask me if they can go in the forest.  The space probably measures 4 metres deep by 60 metres wide; it’s a long narrow strip.  You wouldn’t think that there would be enough in there to sustain their attention over the course of weeks but there is no sign of them becoming bored.  They are eager to explore it every single day and pay close attention to how it changes.  Their engagement is, for me, in stark contrast to how children behave around traditional play structures.  There is always a lot of behaviour management in the playground.

It often feels that we spend most of our time on the playground saying no.

In the bush, it’s very different.

FI says he likes the bush area “because all my friends are there and I like to play there because it’s mushy and there’s berries. It feels good to go there. Cause I didn’t get to go there last year.  I wasn’t allowed – only the big kids could go there – now I can.”

MK says “Cause there’s lots of sticks. You can break them off their tree. You can pick up leaves. Play in the puddles and with the leaves.”

TB says “Because I like where the corn grows in the field.”

Some of the most interesting comments were about the kind of play the children engage in outside.

XC says “we can play any way we want.”

LH says “It’s fun because there’s nothing there.”

ON says “Because there’s a pole and a slide.”

It’s not that we’re specifically instructing them on how to play in the playground area (although we are telling them what not to do) but somehow they perceive that there’s an agenda.  They understand that their play is being managed in ways that detract from their enjoyment and they’d prefer to be somewhere freer. I wonder about how much money we’re spending on playground equipment and whether we’d be better off just letting the grass grow high and the trees grow back.  What would change about the quality of children’s play and social interaction if all of the “don’ts” were taken away?

For instance, our children have spent an enormous amount of time carrying a huge tree branch around the schoolyard.   It’s a challenge that doesn’t loose its appeal.  How do you balance the branch?  How many children do you need to carry it?  Do we stand on both sides or all on the same side?  Endless fascination, endless engagement, endless amusement.

They recently found a log in the green space.  It may have been part of someone’s retaining wall at one point.  Now it’s a teeter totter.

Another day it’s a bridge…

All of this fascinating play happens outside the realm of adults, in kid land.  I’d like to see what would happen if we allowed kid land to expand a little, if we gave it more space, permission and time.  In her 2008 paper “Meddler In the Middle” published in the journal Innovations in Education and Teaching International, Erica McWilliams proposes “less time spent being a custodial risk minimiser and more time spent being an experimenter and risktaker” (vol 45, no 3, p.265).  I think that this idea is particularly applicable to the outdoor context and I wonder what it’s going to take to get us there.