The last several weeks and months have been busy ones as I’ve been getting used to my new job and figuring out how to manage all the competing priorities in my life.  How does she do it all? Well, I don’t always do it all very well, so there’s that!

It’s been harder, in this new role, to tease apart the thematic threads of my work and to find things that are worth writing about.  It’s not that they aren’t there, it’s just that every day is so different.  Just when an idea springs forward, another idea replaces it in an endless loop of upstaging.  If I don’t have time to write about it right away, poof… it’s gone.  People ask me where I went in a week and I have to check my calendar to remind myself.  The whirlwind suits me but it isn’t really conducive to thoughtful reflection.

But, as I looked back on my notes over March break, I noticed that one phrase has come up several times in my conversations with Kindergarten teachers.  We talk about their challenges working with an inquiry-based program, often for the first time, and they mention that they’re frustrated because, it seems, the “kids aren’t interested in anything.”

Now, I’ve taught a lot of kids over the years, I worked as a nanny and a camp counselor, and I have kids of my own.  I have yet to meet a kid who, literally, isn’t interested in anything.

So, what does this really mean, this lack of interest?

It could be any one of those things or it could be something else entirely but more than anything, what I notice when I spend time in the classrooms where that frustration sits, is the lack of patient observation.  Several bloggers that I follow, Teacher Tom most notably, talk a lot about not doing.  He often mentions what he could, but doesn’t, say or what he could’ve, but didn’t, do in his interactions with kids.  We get a glimpse into this alternative, teacher-led universe, and are then reminded how things turn out when the adults don’t lead and choose to listen and watch instead.

I think the biggest barrier to students expressing genuine interest is our adult desire to teach, to make it look like something is happening, to busy the room with activity, even when the child’s pace is slower, more meandering, completely un-linear.  As I’ve learned all too well in the past few months, activity can be the enemy of observation and reflection.

I think we also sometimes suffer from a profound lack of imagination.  We wait for an interest that looks like school and, when it doesn’t land at our feet, we get annoyed.  I have a 7 year old boy at home and, while he has many interests, he is very, very interested in poop.  He isn’t the only one.  I came across this documentation in a small rural school I was visiting and I thought it was delightful, a great example of locality in pedagogical documentation.  I wonder, where would you go with this?  What questions would you ask next?  How would you develop this interest if this were your classroom?  Happy kid-watching and, as the snow melts, watch where you’re walking! 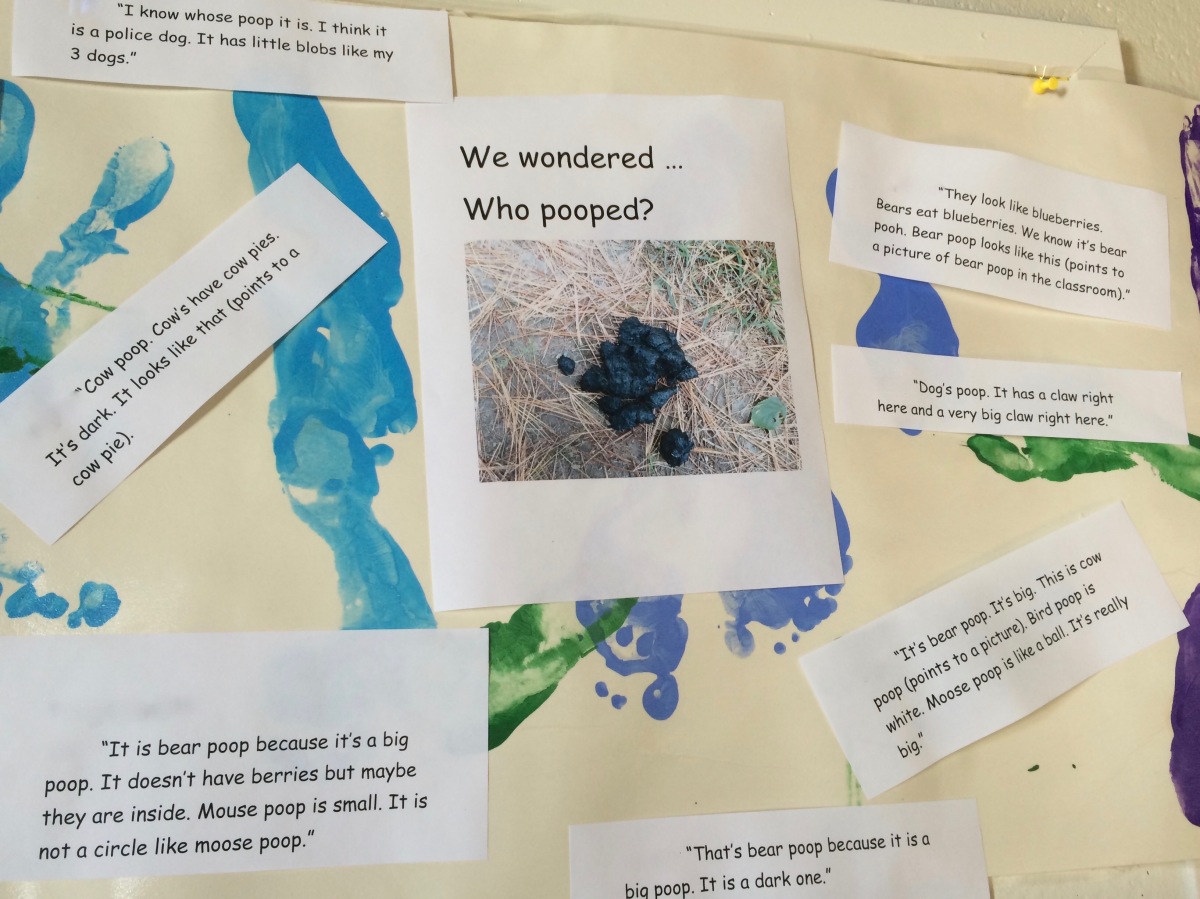