The first few weeks back at school have had me going back to my roots in Kindergarten.  I’ve had the pleasure of visiting many classrooms and interacting with lots of curious and capable kids. Maybe it’s nostalgia, but there’s always a part of me that’s struck by the timelessness of early childhood.  As much as we lament the way society, or technology, or time changes children and families, there are some constants that remain, regardless of the specific moment we find ourselves in.

I’ve had two kids this week tell me that I look like their grandmas (because I don’t dye the grey out of my hair – I’m 41) so perhaps you’ll indulge me in a little walk down memory lane.

As Karyn Callaghan so eloquently describes in this video, children quite literally see the world from a different perspective.  They are closer to the ground than we are and it’s important that we get down on the ground to see what they see. Often when an educator tells me she can’t figure out what a group of children is doing or how to move their learning forward, I suggest that she spend some time sitting on the floor, watching the students or even playing alongside them.  Creating your own drawing or building or ramp or pattern that pushes the learning forward by increasing the complexity or the height or the structural challenge can be as effective (or more) than verbally prompting a child.  So much of our communication – regardless of our age – is nonverbal and you will miss a lot of what’s going on between children if you always remain at adult height. Make the floor your friend.

Those kids look too old for kindergarten, you may be thinking.  You’re right. That’s my son and one of his friends. They’re much older but they’re still fascinated by building things outside, playing outside, all things outside. Technology is seductive but outside is absorbing.

Time spent outside with your students is never time wasted but, like being on the floor, it helps if you’re close to the action.  Watching from afar rarely allows you to understand what’s going on. You’ve got to be in on the action.

Grab a shovel or a stick and go with them.  You’ll have a much better idea of where to take the learning if you’re there when the questions (verbal or not) are being asked.

Sitting is bad for us. Sitting is the new smoking. Sitting is sufficiently problematic that many of us wear alarms that chide us when we sit for too long. And yet…

Too often we expect young children (both in Kindergarten and beyond) to sit for far too long and then we get upset because many of them can’t. Even when they can, it’s often not because they’re attending to what we’re trying to teach, it’s just that they’ve become expert self-regulators. They rub their legs or tap their fingers or zone out so that they appear compliant, don’t get into trouble but still manage to cope with the stress of remaining immobile for so long. Consider limiting your carpet meetings to 10-15 minutes.  You’ll get more bang for your buck, children will attend to what you’re saying and you’ll have less negative behaviour to manage.

Somewhere between the days when Kindergarten teachers spoke to everyone (bank tellers, police officers) in a sing-song tone and today, we’ve lost the connection between Kindergarten and singing. I’ve visited too many classes where there is hardly any singing. This summer I was giving a workshop and a teacher asked me if there was a website where all the songs I was teaching were available so that she could stream them on her SmartBoard and thereby avoid actually singing. We have become singing phobic.

Maybe I should blame American Idol but many teachers are convinced they can’t sing. I’m going to let you in on a little secret: the kids are not Simon Cowell and they really don’t care how great your voice is.  Another secret: being “good” at singing is mostly about practice.  I’m always amazed when I have the occasion to sing Happy Birthday with people who go to church on a regular basis.  They harmonize effortlessly, they stay on the beat and they all find the same key.  It’s not because they’re formally trained in vocal music, it’s because they sing regularly; they are good at it because they practice.  You’ll get better too, I promise.

The other reason singing is so important is that it is one of our best strategies for developing phonemic awareness, the bedrock upon which we build literacy skills. The way that sounds are segmented, emphasized, and placed into rhyming patterns in songs helps children to build their awareness of sound to symbol relationships. Song lyrics can also be used as shared reading text and then posted for students to read and sing together which continues to build their developing literacy skills.

Finally, singing helps to smooth out transitions (lining up, walking in the hallway) and builds routines that kids look forward to. Singing feels good and it gives kids something to do during times when they might otherwise find themselves at loose ends and irritating each other. Sing your transitions and you will find they are much more manageable.

It is very easy sometimes to fall into the habit of managing behaviour by saying “no” a lot.  I’m not advocating that you allow behaviour that is anti-social or dangerous but it is often so much more effective to recognize what’s going well.  Most children will notice when other children are being praised and will rush to join the club. This works equally well with teenagers.  You can even do it in a song!  Developing a practice of noticing when kids are doing well will also shift your perspective towards the things that are going well in your classroom. Too often we fall into despair about how much work there is to do and we forget to acknowledge how far we’ve come. It’s October… to paraphrase Robert Frost, we have miles to go before we sleep.

Kids are fascinating creatures.  They are perplexing and curious, bewildering and bewitching.  Frequently, when I document a conversation or an event, I look back at it and think: “What was that all about?”  It’s often not immediately clear; it may never be clear.

Yesterday, when we went into the greenspace, N.I. perched himself in the little rock alcove that they’ve all decided is their chair.

I thought at first he meant “highness” – like a throne for a king.

But when I asked him what he meant he told me “it’s because the rocks are high.”

Then, as we continued our walk, the children started to push their way through a dense patch of bush near the back of the property.  They said to each other: ” We’re going to the camp high-y-nest in the high-y-nest city.”

I’m standing there thinking: “Like hyenas? Does this have something to do with Africa? The Jungle?”

Then we got to the edge of the bush and a white dog dashed out and started barking at us.  His exuberance was met with a solemn: “Look, Madame, we found a high-y-nest dog.”

Of course you did. 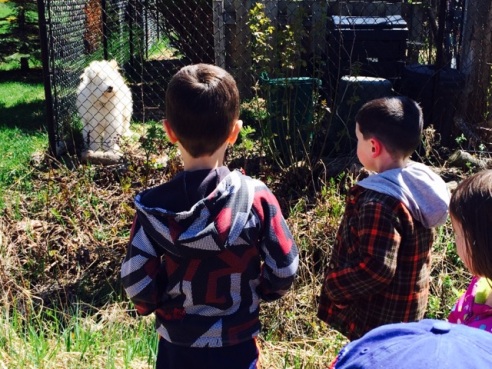 At this point, I probably looked a lot like a confused dog with my head cocked to one side and a perplexed look on my face.

Now, if there’s one thing that I wish I could change about school in the interest of furthering inquiry, it would be to remove the schedule.  I wish we could eat when we’re hungry, go outside when we like, and stay out as long as we want.  But, that’s not the reality of busing and contracts and bells.  Part of my perplexedness (it’s really a word – I checked) is because I can’t always stay with something as long as I would like to, as long as the kids probably needed to in order to develop this high-y-nest narrative to the point where it might have made sense to me (maybe it never would).  It was time to go in so we trooped back towards the school, with the world of high-y-nest remaining mysteriously elusive, at least for the adult among us.

PS: If you ever want to read a great story about ditching the schedule (and more), check out William Ayers’ To Teach: The Journey of a Teacher – fabulous book.

“In the morning they came up out of the ravine and took to the road again. He’d carved the boy a flute from a piece of roadside cane and he took it from his coat and gave it to him. The boy took it wordlessly. After a while he fell back and after a while the man could hear him playing. A formless music for the age to come. Or perhaps the last music on earth called up from out of the ashes of its ruin. The man turned and looked back at him. He was lost in concentration. The man thought he seemed some sad and solitary changeling child announcing the arrival of a traveling spectacle in shire and village who does not know that behind him the players have all been carried off by wolves.”

Have you read The Road, by Cormac McCarthy?

I read it when I was on maternity leave.  I read most of it in the middle of the night, balancing a tiny screen while nursing a tiny baby, riveted awake by McCarthy’s prose and my own terror.  It is a terrifying, post-apocalyptic read – not usually my thing, really.  I’m not even sure why I started reading it but it was so good, so absurdly well-written, and so compelling that once I got started, I couldn’t stop.

I find myself coming back to The Road again and again, it’s become one of those touchstone books for me.

I think of it especially when I find myself somewhere desolate: a big city in November, an empty field in the middle of winter, early spring when the snow is half-melted and dirty.

This afternoon I had a Road moment.

The greenspace at the back of our school, which I’ve been writing about all year, has been devoured.  We went back there this afternoon and it was clear that some giant piece of machinery had eaten it.  All that was left were mounds of snow and dirty dead grass, topped with broken tree limbs and masses of pointy twigs.  It was sad and frustrating and ugly and bleak.  I was devastated.

But then I noticed the kids.  They climbed over the mounds of snow, they pulled out the sticks and carried the broken branches.  They lay down in the snow and looked at the sky.  They didn’t say anything. 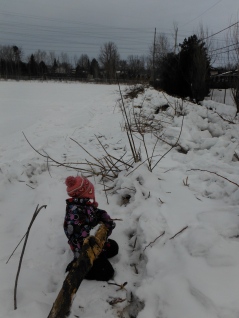 They didn’t seem at all phased by the change in the landscape; they just accepted it and moved on.  Not a single child asked what had happened.  Maybe they figured it out because of the tracks in the snow.  Maybe they assumed that their green space was still intact, hidden under the snow.  I was so awed by their silence that I didn’t feel right asking them; it felt intrusive.  It had become a formless space, somewhere that they could approach as though new.  While I was busy grieving, they were exploring – venturing bravely into a new world. 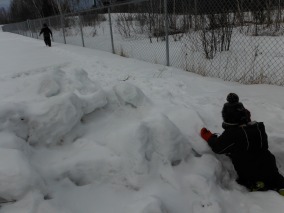